Castiel had a good night. He slept cuddled next to me on a mattress on the floor of his recovery room. He was able to get up to go to the bathroom in his litter box – and while it was awkward (especially with so many drugs on board and the cone), he got the job done. At one point, he got the litter in his cone and stood staring at me – a look that said, “hooman, I require assistance.” There were a few face plants while he was learning to walk, which was frustrating for him and hard for me to watch but to his credit, he just got up and tried again.  His sister Clover tried to break into the recovery room at 1:30 am by doing summersaults against the door. She missed sleeping with her brother.  She will have to wait a little longer because we can’t have her licking the wound or playing rough with Castiel.

Castiel woke me at 6 am meowing. At first, I was scared he was having breakthrough pain but it turned out he was just hungry. I kept trying to pet him gently and he got frustrated with my lack of comprehension and walk-hopped over to his empty dish and stared at it as if to say, ” I go away for one night and you forget how this works!” I brought in breakfast and all was well again in the world. He ate all his food and used his box again. No poo yet but he is peeing.  I’ve been giving him wet cat food with lots of liquid and cat broths because he isn’t a big water drinker and  I don’t want him to get constipated. He had some tuna water at lunch too.

Castiel hung out with my husband Brian in his office all day, mostly napping in one of his beds or sprawling  in sunny spots. This is  normal for him even when he is not recovering from a major surgery. His younger siblings napped the day away too. He hasn’t fussed with his suture or the fentanyl patch so we take  the cone off when we can supervise him closely.  This has made him much happier. We’ve had some difficulty applying his cold compress or rather keeping it there. It is supposed to be applied four times a day for 10 minutes at a time. We wrap it in a towel and place it against him — and he hates it. He squirms. I don’t think it hurts or is uncomfortable, he just doesn’t get why we would want to place something cold against his skin. He thinks it’s a terrible idea. He has had a little swelling so we’re tying to get Castiel to accept the compress. He hasn’t had any reactions to his medicine — all good.  The fentanyl just makes him a bit sleepy.

The nurse from the vet hospital called to check up on him this morning. We told her he was alert and trying to walk about and that he was eating well and even took an interest in a marauding squirrel in his garden. He is an indoor only cat but he likes to watch squirrel as he scurries about the yard and hides peanuts in my planters. We have a long window so Castiel could keep an eye on squirrel from the mattress this morning. Castiel even managed to balance just right in his litter box tonight — it was a perfect job.

This evening, he is lounging in the family room with us and his siblings.  He is also back to his usual antics of trying to steal his sibling’s food. We are wise to this and thwart his attempts.  Everyone has been on good behavior, although his brother Aleksandr is a little nervous about Castiel’s new gait. His one-year-old sister Clover doesn’t care. She nuzzles right up to him.  We let Castiel out of the crate because he is not trying to walk too much. He sat on his favorite blue chair this evening and is now sprawled on the carpet waiting for me to resume my jigsaw puzzle attempts. I think I’ll go join him. We’re working on a Dr. Who puzzle. 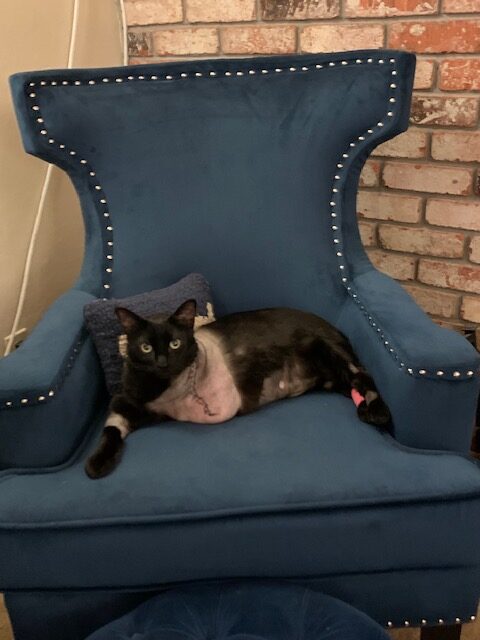 6 thoughts on “Day 1 after Surgery”

This site uses Akismet to reduce spam. Learn how your comment data is processed.

About Your Tripawds Blog:

New Tripawds Bloggers: Please review your default first blog post for help getting started with your blog or review the Help Videos in your dashboard. Edit these widgets from your Appearance settings to remove this notice, upload a custom header photo, or choose from 130+ themes, and much more!